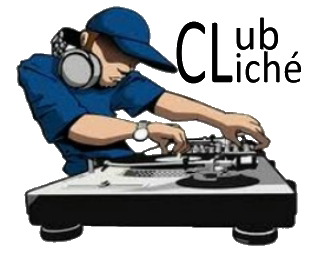 The Creational History of Club Cliché

In 1973 DJ Jay Cee started deejaying on small private partys for friends and family, with Club Disco and Boppin' Oldies.In 1977 bored with the lack of local club life Jay Cee Corp! took the initiative of starting " Disco Dance Party`s". Together with girlfriends Marcella en Adri they organized the first ever disco events in Den Bosch, with a small guy called Mike as a bar assistent. They played Glam Disco and Oldies on these party's! In 1979 now with team-mate DJ Fred Remeeus, they openened up there party's for all Southern Party Peoples. The both, either together or alone, organized a pack of party's in and around Breda and Den Bosch. In 1981 DJ Greenaway joined the bunch as a specialist on that time favourite musix called New Wave.

The first party they did together was at the back lounge of cafe Boulevard.The three of them did a few party's with combined “ Nouvelle Vague, Disco and Oldies“.

Now the three were nicknamed the Jay Cee Corporation!, playing a varity of Blitzz Wave, New Wave Danceables and Oldies!

In 1984 DJ Jay Cee Corp! and DJ Greenaway were asked to enlighten a local club called Polly Magou. They had a strong hand in the party's that the club owners organized for their visitors. In 1986 they stopped working there after disputes about what initiatives should be taken to keep Polly Magoo vibrant.

In October 1988 DJ Mike Kievits asked DJ Jay Cee Corp! if he could play an advisory role at a party he planned to do at W2.

At this “ Boom Party “ DJ Mike (DJ Escapism) teamed up with his friend, DJ Funkadalex. This first House Music party opened the way for a whole sequence of House Music Party's! Up untill the early nineties.

After this great succes, DJ Mike Kievitts and Andre Noorda made a assembly in 1991 together with DJ Jay Cee Corp! Would he join them in the forming of a association to organize more party' s in and around DB. DJ Jay Cee Corp! had to refuse because of private matters and as they had plenty of know-how of their own.

This was the beginning of “ Club Cliché “. They started with Andre Noorda, Mike Kievitts, Michel Houben, Maurits en Johan. This bunch and Mate Marius Kuilenberg formed a temporary organization under the name of A Central House Manifestation to celebrate the release of the first House 12# by the Duketowns House JetSet called “ Major Malfunction gives You Central House “. This Party made headlines known as Starwood Party! DJ Jay Cee Corp! played a side role at a few party's this “Club Cliché “ organized thru the South of Holland in the early nineties and mid nineties. To name a few: